LSU Board of Supervisors

KAITLYN: ON FRIDAY JANUARY 25 THE LSU BOARD OF SUPERVISORS HELD THEIR FIRST MEETING OF 2019 IN THE UC BALLROOM ON THE LSUS CAMPUS. THIS MEETING WAS THE FIRST OF SIX THIS YEAR WITH ALL THE OTHERS TAKING PLACE IN BATON ROUGE. THEY HAVE NOT GATHERED IN SHREVEPORT SINCE 2015. THE CHANCELLORS FROM ALL LSU LOCATIONS ATTEND. THERE WAS A WIDE RANGE OF TOPICS DISCUSSED “Approve some tuition and fee amounts for new programs and implement fees relative to authority granted.” “and playing a marquee opponent- non conference- marquee opponent in Tiger Stadium.” KAITLYN: BUT A MAJOR TOPIC DURING THE EVENT WAS THE REUSE OF THE VACANT CHARITY HOSPITAL IN NEW ORLEANS. “A lot of eyes on us, quite frankly, in terms of us repurposing Charity, and I think its probably one of the most important, quite frankly, in my 45-year career, it’s one of the most important buildings that I’ve ever had anything to do with. And that’s why we’ve taken the care that we have.” KAITLYN: ALTHOUGH THE MEETING WAS SERIOUS, THERE WERE STILL OPPORTUNITES FOR EVERYONE TO HAVE A LAUGH. THERE WAS ALSO TIME IN BETWEEN SPEECHES FOR MEMBERS TO COME TOGETHER AND MINGLE. THE DAY WAS BROUGHT TO A CLOSE BY SPEECHES FROM TWO LSUS STUDENTS AND AN LSUS CHAIRHOLDER. “That if I was chosen for this position at the health center, that I would decline because of my job at the Success Center, and how I love it so much.” “It’s home because of our faculty. It’s home because I’m not just a face, but a name.” KAITLYN: THE NEXT MEETING WILL TAKE PLACE IN MARCH ON THE LSU CAMPUS. AND NOW YOU KNOW, I’M KAITLYN GIBSON FOR ALMAGEST STUDENT NEWS. 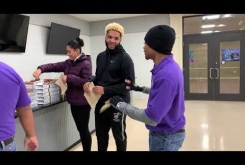 LSUS students put faces to the people behind change at SGA’s Meet and Greet. The... 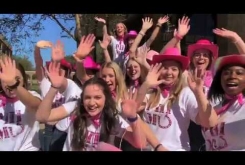 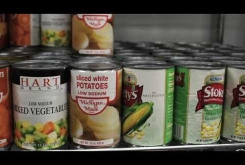 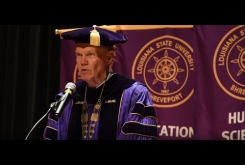